The Estonian Alphabet with video

As you have noticed this blog has been very quiet lately! The reason for this is that since September I have been learning Lithuanian at the university. I have been using some of my spare time to practise by blogging/posting in the language on Journey into Lithuanian. The course lasted a semester (14 weeks) and in January 2013 there will be the end of course exam.

Then, once that hurdle has been jumped I will jump back into my study of Estonian, which I am looking forward to in earnest. I have been itching* to attack the materials I have gathered over the last while, including some sample exam papers and tasks. Why? Well, I am going to sit the Estonian language B1 state exam in February 2013. I have been talking about sitting the exam for a while but I actually signed up the other week (eventually I would like to be comfortable enough in Estonian to sit the B2 exam, maybe also in 2013).

Don't expect any any new posts here until February, until after I finish the Lithuanian exam and get back into Estonian. In the meantime I want to focus on my Lithuanian to see how good a grade I can get!

As I am studying for my PhD in Tallinn I have from time to time to read papers in Estonian. Here is a list of words from something I am reading at the moment.

I have a request to make of you all, readers of this blog. It would be nice if you could leave a comment below in which you introduce yourself and let me know a bit about your connection with this beautiful language. I'd be interesting in learning what you like about the blog and maybe what you'd like to see in the future.

As for the news, I announced here that I am planning to take the Estonian B2-level exam in September next year (with a pit-stop at the B1 exam in February). I haven't looked at the sample papers in a while (they are available here in Estonian - links to tasks are contained INSIDE the PDF files) but I do know I have much work to do. My main concerns are:

Time for me to take another look at the sample papers now.

If you'd also like to learn about the exam and practice a bit you can also go: here and here.
Posted by S at 5:57 PM 9 comments:

More than simply being a dialect of Estonian, Southern Estonian is a language in its own right separate of the state language. There are historically four recognized varieties: Mulgi, Tartu, Võro and Seto of which Võro is the strongest. The Tartu and Mulgi varieties are largely extinct. The historical territory of Southern Estonian covered the modern counties of Põlva, Võru and Valga and the southern half of Viljandi and Tartu. Enclaves also existed at one time in a number of locations in modern day Latvia and Russia but the only modern community of speakers outside Estonia are the Setos who inhabit the historical Setomaa (known today as Pechorsky District on the Russian side of the border).

Under its Tartu variety, Southern Estonian emerged as a distinct literary language in the C17 and was used in publishing and in education. The first Estonian translation of the New Testament (Meie Issanda Jesuse Kristuse Wastne Testament) appeared in Southern Estonian as did the first Estonian newspaper (Tarto-ma rahwa Näddali leht) and the language was also employed in education but its use declined during the nationalism movement in the second half of the C19 and early C20 and under communism where it was felt Estonia should have but one language (standard northern Estonian).

Since 1991 the state has supported a revival in the Võro variety of southern Estonia. Limited education in and about Võro and Seto take place at Tartu university and in Põlva and Võru counties.

Below I have two short examples of the Võro variety of southern Estonian (in bold) with a gloss in standard northern Estonian (normal) and English (italics). The first is a short song burned into wood and displayed outside a gift shop at Suur Munamägi (Big Egg Mountain), the Baltic States' highest point which is in Võrumaa, Estonia. 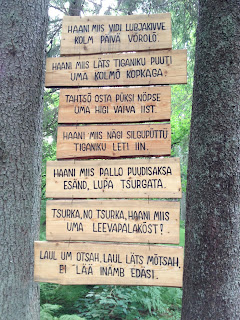 The song is over, the song has failed (lit. went into the forest).
It continues no longer.

TM points out in the comments below that läks metsa and läks aia taha (lit. went behind the fence), when used with inanimate objects, are ways of saying 'failed, screwed up'. Thanks for pointing this out!

Wikipedia states that "some of the most ancient isoglosses within the Finnic languages separate South Estonian from the entire rest of the family". This includes the change from kc to ts as seen in southern Estonian üts and läts (cf. Estonian üks and Finnish yksi and Estonian läks). 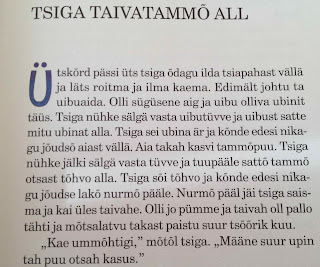 Once upon a time a pig escaped in the evening from his pen to go awandering (and see the world). He first occured upon an apple orchard. It was autumn time and the trees were heavy with apples. The pig rubbed his back against the trunk of an apple tree and from the tree fell many apples.

So, you probably know that asking questions in Estonian can be quite easy. One way, which also exists in English, is to simply keep the structure of the question the same as with statements but but end with raising intonation.

Or in an advert for car rental in Tallinn that I saw on the train:

In the written language or in more formal speech you have learned that yes-no questions are prefaced with kas.

Kas oled valmis?
Are you ready? (Q you ready)

Kas vajad autot Tallinnas?
Do you need a car in Tallinn?

This you refers to the addressee, not the 'indefinite you' of many colloquial English sentences, which is referred to by one in more formal English.

Kas vajatakse autot Tallinnas?
Does one need a car in Tallinn?

However, the most colloquial way to ask a question in Estonian and a way that learners are advised to avoid because it can make you look un(der)educated or rude in the wrong situation is to end a statement with vä or ä.

Yesterday I heard a little girl ask her friend.

This question maker should only be used in the spoken language and amongst family or friends. In other situations it is considered out of place.

You would ask a work-colleague that you are on friendly but professional terms:

Very often you will simply hear ä at the end or sometimes a sort of double question with kas at the beginning and ä at the end. The marker when unstressed allows the speaker to signal that they are somewhat unsure or hesitant, more so than a normal question or are maybe looking for the speaker to agree with their assertion.

Sina tegid seda kooki ä?
You made this cake?

It is kind of hard to explain this marker as you won't find any written rules in any grammar books. The best thing to do is listen for it in the speech of your Estonian friends (if you have any) and make a written or mental note of the question/ statement and the situation. If you replicate the speech of your peers you'll blend right in. Just make sure to also make a note of where they don't use it. That is also important to remember.

I'm pretty sure it has evolved from 'või'(or) - at least I sometimes use 'või' that way, since 'vä' sounds so very childish.

I think it has evolved like this (I took your sentence, although I think it's not the best for this example):

But I haven't heard anyone use just 'ä' instead of 'vä', yet.

'Kas vajatakse autot Tallinnas?' - I think that adessive + 'on vaja' is used more often than the verb 'vajama': 'mul on vaja', 'sul on vaja', etc..., (actually allative (mulle on vaja), ablative (mult on vaja) and elative (must on vaja) forms exist also). This can be transformed to passive very easily by omitting the person(or whatever is used) and just using 'on vaja', for example: 'Kas on vaja autot Tallinnas?' or 'Kas on autot vaja Tallinnas?'

The origin of "vä" is deffinitely "või". But you may notice one interesting thing about "vä". The more educated and grown a person is, the less accent falls on the "word" "vä". Teenage girl asking: Mina VÄÄ? puts all the accent on VÄÄÄ???? Grown up in casual conversation asking "mina vä?" almost sounds like "MINA v?" or "MINA vah?"

Aitäh ainurakne ja iidala!
Posted by S at 9:36 AM 9 comments:

This post will be continuously updated as I come across more examples.

The example comes from a poster for a venue:

Tule lõunale ja dringile!
Come for lunch and a drink.

As you know, the normal translation of the English drink is jook. The word drink (gen. dringi) refers to an alcoholic beverage served at some pub, club or other venue.

This example comes from an advert in a local newsletter:

To express to pay someone a visit in Estonian is: külas käia

Mis inspireerib Sind tegutsema?
What inspires you to take action?

Watch the above video: Fifty People, One Question, Estonia and try to understand the speech the first time round without the subtitles. Then play the video again and press on 'CC' to see how you got on. This is a very cute version of 50P, 1Q especially given that it's in Estonian.

My favourite 50P, 1Q though still has to be the one made in Galway in my homeland of Ireland. This video is so emotional and can be quite sad at times.

In today's post we are going to look at the creation of agent nouns in Estonian, nouns such as walker, builder, teacher, actor etc. as well as nationalities and other identities built from place-names.

Oftentimes we can construct such agent nouns with the suffix -ja added to the -ma infinitive stem.

There are other endings too such as -lane, -nik and -ur.

For nationalities or names for inhabitants of place-names, the root word loses its final vowel.

Beware that some countries do not follow this rule. The Poles for example.

Today I went to the gym to use the treadmill. I am training for the Tallinn autumn half-marathon. Until now my best distance is 13km which I ran in 77min. I know that it's nothing to write home about but I am still a newbie to the running world. Practice makes perfect, as they say, and so I go running two to three times a week. I should really practice on the road as well and not just on the treadmill at the gym.
Posted by S at 6:02 PM No comments: